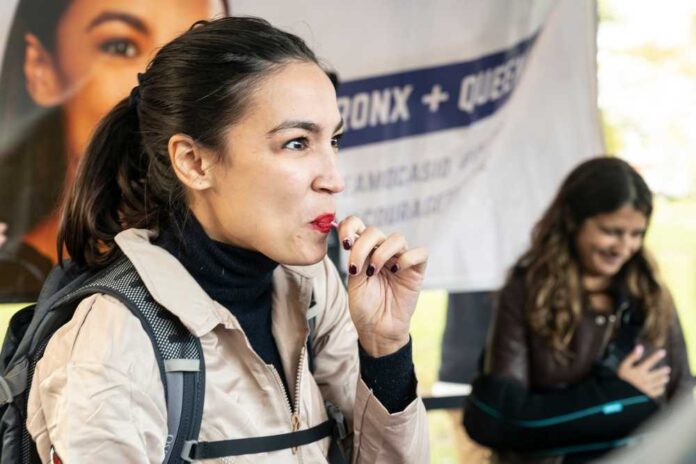 Ngô tweeted a screenshot of what appears to be an Instagram post by AOC sharing a promotion of an event planned by the Rolling Library. That post asked people to “defend Drag Story Hour in NYC” and “help protect queer spaces and expression under threat from the far right.”

Congresswoman AOC has shared a far-left flyer on Instagram for comrades to come to a direct action to “protect” a children’s drag queen event in Queens. A number of these drag events have been protested by BIPOC New Yorkers concerned about what they say is sexual propaganda. pic.twitter.com/2O5oMVb6Fm

Another part of the post warned that a group of “violent, loud bigots” were planning to “disrupt” the next planned event on December 29, described as “Drag Story Hour” at the Jackson Heights Library in Queens.

The post said, “Queer community members and allies will be there to show the fascists they are not welcome, but that kids and drag queens are.”

It went on to call on the public to show “unwavering support” for the event as well as “queer and trans people” to make the event welcoming to “kids and their grownups as they enter the library.”

Promoting the event aligns with AOC’s normal public posture regarding drag performances involving children. She regularly tells drag performers that she sees them as true “patriots.”

Other far-left progressive New York City lawmakers join with AOC in her praise for drag “storytelling” for the benefit of community children.

NYC Mayor Eric Adams (D) said earlier this year that “drag storytellers, and the libraries and schools that support them, are advancing a love of diversity, personal expression, and literacy that is core to what our city embraces.”

Rep. Carolyn B. Maloney (D-NY) tweeted earlier this year that she “had the honor of assisting with a Drag Queen Story Hour in New York in April.” Maloney’s thirty-year Congressional career is coming to an end this year, but not because of her support for drag performances for kids. She was the victim of redistricting that saw fellow long-term Manhattan representative Rep. Jerry Nadler (D-NY) trounce her in an unusual head-to-head between entrenched NYC politicians.